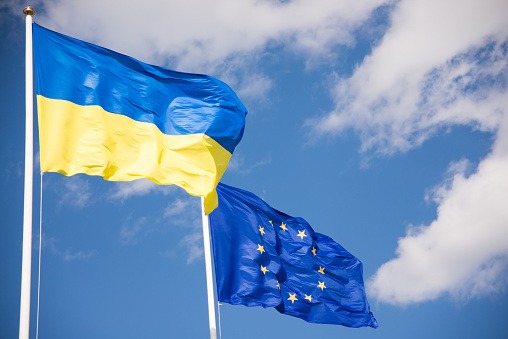 First of all allow me to express gratitude for your support and that Europe stands these days with Ukraine.

I am happy to speak with you today, in times when not only my country Ukraine, but the whole Europe now lives in a different world than one month ago. The war in Europe is changing completely not only our understanding of the world in which we used to live, even with pandemic crises, but our attitude to values and what and from whom we need to defend the civilized democratic world.

I believe it’s now simple – aggressor should be punished. Because 300 people killed in destroyed by Russian weapons Mariupol theatre, or ruined churches and empty cities around Kyiv with dead bodies after Kremlin attacks, so as in many cities like Okhturka, Kharkiv, ancient Chernigiv or port city of Mykolaiv are victims of new fascism born by Putin.

It’s also a new understanding of the role of culture and media which Kremlin uses in this war. Culture has become for rushists an instrument of propaganda that justifies and supports war. That should never be the case. Culture has always been and should remain the main „soft power”. In contrast, Ukraine continues to focus on balancing the world’s aggression with our „soft power” – our powerful culture, heritage and media which resist fakes and manipulations, which are coming from Moscow. We strive to develop a democratic society and promote national culture.

The charity concert „Together with Ukraine” in Poland is a great example of the capacity of the soft power of culture, as the event raises funds for the Polish Humanitarian Action, which provides assistance to Ukrainians. Soon, Ukraine will win, and we will return to the concerts on the territory of our country. Besides, many concerts and cultural performances happened in the Netherlands, Italy, Lithuania, France and other countries. There is only one worry – please do not organize such events together with Russian artists.

We also address our clear position to the whole world through the music of peace – “Free Sky” artistic actions when the orchestras performed the National Anthems of Ukraine and Europe in the streets of Ukrainian cities to convey to every resident of the free world the idea that the Ukrainian sky should be closed that we may continue to create freely and safely.

I am grateful to Ukraine’s specialists in Culture and Arts, both from the governmental and non-governmental sectors, who work tirelessly to protect and evacuate our cultural artifacts. However, the invaluable cultural heritage, which proves Ukraine’s long European history, is currently under threat. The aggressor breaks international law, including the Geneva Conventions, and the Hague Convention for the Protection of Cultural Property in the Event of Armed Conflict. The historical center of one thousand years old Chernihiv city is under Russian bombardment every day.

As of March 31, 2022, in the database created by the Ministry of Culture and Information Policy of Ukraine on war crimes of Russian troops against the cultural heritage of Ukraine (culturecrimes.mkip.gov.ua) 135 episodes were recorded and verified. Crimes were recorded on the territory of 10 regions of Ukraine and in Kyiv

Religious buildings suffered the most – 59. Among them: are the churches of the Orthodox Church of Ukraine and the Ukrainian Orthodox Church of the Moscow Patriarchate, Protestant prayer houses, Islamic mosques, Jewish synagogues.

58 objects of cultural heritage destruction and damaged as a result of the shelling of the occupiers suffered. These are monuments of architecture and urban planning (5 of them are monuments of national importance). 25 valuable objects of historical buildings – old buildings of the second half of the XIX – early XX centuries. 10 monuments – memorial stelae or sculptures associated with historical events of the middle XX – early  ХХІ century.

To the loudest examples of the destruction of cultural heritage, that is known to this day, it is possible to take the following:

I told only a small part of that huge list of destruction. Unfortunately

I am grateful to Italy and to you, dear Mr Franceschini, personally, for the impressive gesture and a suggestion to rebuild the theater after our victory. I will give your quotation here: “Theaters of all countries belong to the whole of humanity”. And I am encouraging all of you to follow his initiative, even more. We are confident that freedom will prevail and international funds first of all from EU should be created sooner than later to continue our big Restoration program. But the program must touch not only on our initial plan to restore 300 museums, castles and churches but hose the cultural heritage objects that were ruined by the war.

We have received unprecedented support from the international community – from intergovernmental organizations like UNESCO, from museums, NGOs, professional associations. We raise the issue of preserving cultural heritage in Ukraine, as russia violates the Hague Conventions during armed conflicts. That’s why we ask to exclude russia from UNESCO and the transfer of the 45th session of the World Heritage Committee from Kazan to Lviv. It’s impossible now to speak about preserving cultural heritage in the country that ruined it and kills civilians.

We will also accumulate the donations on the special account of the Ukrainian state agency of arts and artistic studies for the protection, the first aid and restoration of cultural heritage objects and for the support of arts and culture institutions, specialists, and artists.

Today, as never before, culture is becoming a driver of social and digital transformations.

Digital transformation plays a key role in times of war. We must quickly adopt the entire system of public administration and services to the circumstances where traditional bureaucratic procedures do not work as usual. We must accumulate and operate with the information as quickly as possible and protect data in situations when culture specialists and even members of Ministry teams are working in different regions and often not from offices but from shelters without access to the paper archives or other documents.

Before Russia started the war against Ukraine, creative industries in Ukraine were developing rapidly. They accounted for 4.2 % of Ukraine’s GDP and 4 % of employment. However, Russia’s invasion disrupts our creative economy. The damage is already in the billions of dollars.

Despite their difficult situation, Ukrainian creatives have found ways to help Ukraine during the war. Our designers produce things for the Ukrainian army, leading advertising agencies to create content to disseminate true information about the war all over the world, and more than 300 000 IT professionals are united to block Russian governmental and propagandistic websites.

Currently, all efforts should be made to keep creative companies afloat. It is very important that the Ukrainian economy operates even in times of war. How can you help? At the Ministry, we established a charity fund — you are welcome to donate. We would be much appreciated for any targeted donation to support Ukrainian creative industries, as well as cultural institutions. The funding will be used to support creative businesses and promote Ukrainian culture abroad.

Today, it is high time for Europe to act and show that it remains true to its fundamental values.

Therefore, I also ask you to increase cultural sanctions.

Finally, a couple of points about information policy, that I call on you to:

⁃ Broadcasting Ukrainian channels for the EU so that people can really see the real course of the war in Ukraine.

For these purposes, we launched two weeks ago the Russian-speaking channel Freedom, which has millions of viewers. This month we are also going to launch the English-speaking channel „U24” with the support of President Zelensky.  And we are looking for your support too.

The Russian military is shelling and bombing our cities.

The Russian military is destroying our cultural heritage.

The Russian military killing civilians and children who hid in the theater from the war. Such brutal cruelty shows only one thing – the goal of the Russians – to destroy Ukraine, both physically and historically.

This war is not just Putin’s war — it would not have happened without the approval of millions of common Russians.

From this day we are going to renew our cultural activities in some theaters and cultural and historical reserves. With all security measures. During wartimes Actors already playing in bomb shelters. But it also is starting in regular theater halls now. Because freedom will prevail and culture wins.